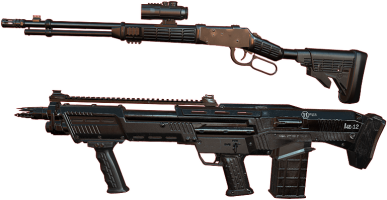 There’s few things more dangerous than a cornered animal… except perhaps a cornered survivor with a lot of high explosives. In the new game mode Holdout, everyone is cornered all the time. In Holdout, players play through a different small map for each wave, each with limited room to maneuver or retreat, forcing players to stand their ground against the Zed onslaught. Can you stand shoulder to shoulder with your allies in the face of overwhelming numbers, or will you break and run, leaving your team to die messily?

With this update we bring back a classic and introduce a long-requested new weapon!

Second, we have the long-requested light machinegun in the form of the Stoner 63A. With high ammo capacity, a high rate of fire, and limited accuracy, the Stoner 63A is a tier 4 Commando weapon without peer when it comes to hosing down large groups of Zeds with chunks of fast moving lead. And we could make a joke about the name, but we wouldn’t stoop that low… at least not yet.

Our first Holdout map, the Descent is a series of underground chambers beneath Volter Manor. Each wave takes place in one of ten different rooms, and the rooms are in a random order after the first, so each time you play you get different experience. These rooms represent the more secure facilities used by Hans in his experiments and need to be cleaned out to put a stop to his terrible work.

Our new Community map, Nuked, is the burnt and broken remains of a city that has a Zed problem on top of an incoming nuclear attack. Don’t stare directly at the nuclear flash and remember to duck and cover!

Von Strasser has a score to settle with Hans, and DJ Scully… he just likes lighting things on fire. Don’t judge. While exploring Volter Manor and testing new weapons for Horzine they find the entrance to The Descent and end up in far more trouble than they bargained for.

Can Van Strasser get his revenge? Can DJ Scully resist making jokes about the Stoner 63A name? I think we all know the answer to the second question.

Ever wonder “Hey, I’m a Commando who is awesome with assault rifles. Why am I not awesome with the HMTech-401 Medic Assault Rifle? It’s an assault rifle, isn’t it? It’s right there in the name!” Well, now you are! With the new Multiperk system, many weapons are considered perk weapons for more than one perk, allowing increased flexibility when it comes to choosing your armaments.

Use an Incendiary Trench Gun or VLAD-1000 Nail Gun as a Support, an M16 M203 as a Commando, or a HMTech-201 Submachinegun as a SWAT, and receive all the benefits of using a perk weapon.

Perfect for those times you feel like going medieval on a Zed, the Bone Crusher lets you get your inner barbarian on with face-breaking shield bashes and skull-splitting mace strikes. A tier 4 Berserker weapon, the Bone Crusher lets you cleave a path through hordes of Zeds with ease while making your parries even more effective at blocking damage.

Nothing like a hubcap, a baseball bat, and a boatload of desperate ingenuity to create the latest in close combat anti-Zed weaponry!

When the erupting volcano is the least of your worries, you know your tropical island vacation has gone awry. Welcome to Zed Landing! Thanks to a crashed Horzine cargo plane, this island has become infested with Zeds, all of whom want to eat you before the volcano cooks you. Or after really, they’re not that picky; Zeds are into barbecue.

Along with the new map comes a selection of new achievements to prove you faced the volcano and lived to tell the tale.

Horzine has been known to save some Dosh by shipping its mercenaries aboard the cargo planes of its ZedEx subsidiary, but on this trip across the South Pacific there's more than cramped seating and a lack of in-flight entertainment making life difficult for Mr. Foster and Donovan Neal.

ROSWELL, GA – November 18, 2016 – Tripwire Interactive, in collaboration with Deep Silver and Iceberg Interactive, is pleased to announce that their eagerly awaited co-op sci-fi horror FPS game, KILLING FLOOR 2, is available now globally on PC, and for the first time the franchise will be available for console gamers with versions for the newly launched PlayStation®4 Pro computer entertainment system and PlayStation®4 computer entertainment system platforms.

The sequel to the 3+ million unit selling PC game, Killing Floor, makes its console debut with this release, bringing with it, its trademark frenetic gunplay and larger than life gory visuals, completely amplified with fluid controls, sharper textures and overall increased fidelity. Today’s release marks the closure of KILLING FLOOR 2’s extremely successful time in the Steam Early Access phase, selling over 1+ million units and continuing to grow its loyal community. Those who have previously purchased the Early Access version will be able to update their game to reflect the full launch content, including the brand new Survivalist perk, available today.

“We’ve poured our heart and soul into perfecting KILLING FLOOR 2, seeing all of the community feedback from the Early Access phase was invaluable, and to see the game’s full release today is truly overwhelming,” said John Gibson, President of Tripwire Interactive. "We wanted to give existing fans the visceral action that this longstanding franchise is known for, as well as offer new fans a chance to experience the brutal joy that millions of gamers already know and love. Launching KILLING FLOOR 2 for the PC, and for the first time ever on consoles via the PlayStation 4 Pro and PlayStation 4 symbolizes the next step for us at Tripwire Interactive and we could not be more ecstatic.”

In KILLING FLOOR 2, players descend into continental Europe where the outbreak caused by Horzine Biotech’s failed experiment has quickly spread and gained unstoppable momentum, essentially paralyzing the European Union— Just one month after the events in the original KILLING FLOOR, the specimen clones are everywhere and civilization is in disarray; communications have failed, governments have collapsed, and military forces have been systematically eradicated. The people of Europe know survival and self-preservation too well and lucky survivors have gone into hiding.

Not all have given up hope though... A group of civilians and mercenaries have banded together to combat the outbreak and established privately funded operation bases across Europe. Upon tracking specimen clone outbreaks, players will descend into zed-laden hot zones and exterminate them.

KILLING FLOOR 2 is developed by Tripwire Interactive and is published by Deep Silver and Iceberg Interactive for the PlayStation®4 Pro, PlayStation®4, and PC. This title has been rated M by the ESRB, PEGI 18, USK 18.