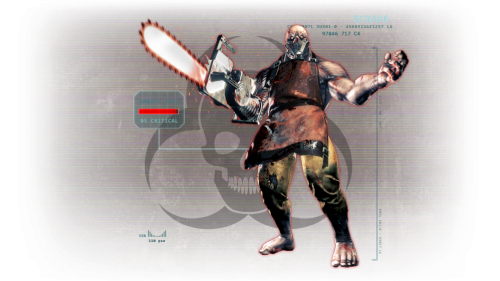 The Scrake is a giant specimen in Killing Floor 2. It is classified as a large enemy, and is considered extremely high threat.
Scrakes appear as muscular and huge humanoids, with a surgeon's mask over their face, in addition to a bloodied apron that they wear on their bodies. Their most distinctive feature is the nerve-controlled Chainsaw on their right arm, which they use to eviscerate their prey. Scrakes are relentless killing machines when enraged and are capable of dealing just as much punishment as they are able to take. Because of this, Scrakes are extremely dangerous and should not be engaged alone in a team game. 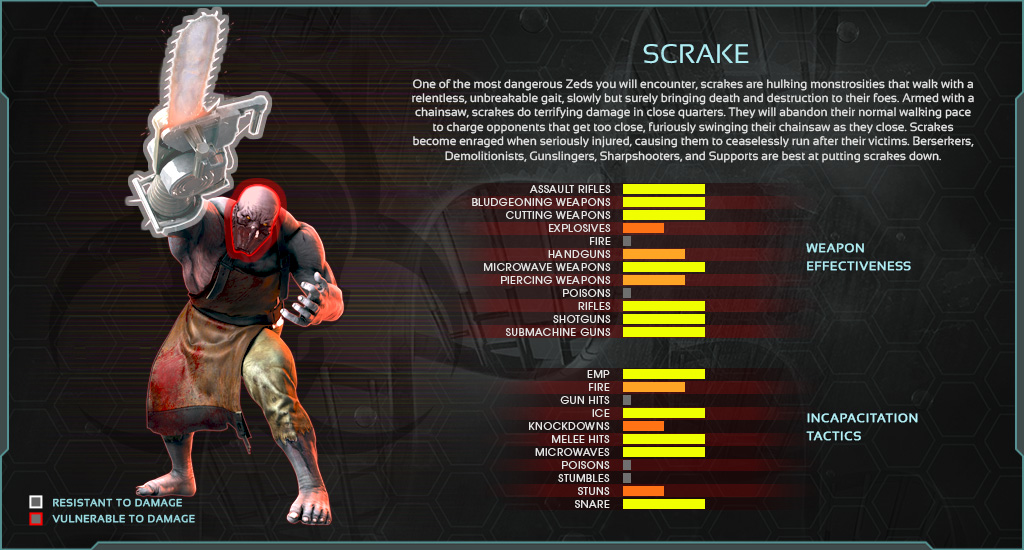 - Scrakes greatly resist multiple forms of damage, and they have only one weakness.
- The Scrake has a unique weakness to the RPG-7's ballistic impact damage. The Scrake will take 400% damage when directly hit by an RPG.

- Scrakes are resistant to handguns and shotguns, but are vulnerable to every other types of ballistic weaponry.

- The Scrake is a highly dangerous Zed. It boasts high health, speed and damage. Care should be taken when engaging the Scrake.
- Upon spawning, the Scrake lets out a global roar that can be heard regardless of position, followed by the sound of a chainsaw revving up.
- Scrakes walk slowly towards players and attack slowly until they are enraged.
- Scrakes enrage once they have taken enough damage. They will begin to sprint and attack relentlessly.
- While calm, Scrakes can block gunfire. When aimed at or shot at, the Scrake will almost always block its face with the chainsaw arm. While blocking, the Scrake takes 80% damage and incapacitating effects are only 20% effective. The Scrake cannot block once it is enraged.
- While calm, Scrakes attack with small arcing slashes and stabbing attacks. When enraged, Scrakes begin to swing their chainsaws in wide arcs, spinning around multiple times and attacking with increased ferocity. They have the potential to hit multiple players with their attacks.
- Once enraged, Scrakes can attack with unparry-able attacks. These animations can be identified by the chainsaw glowing red. This means that the Scrake will not be stumbled or knocked back when these attacks are parried.
- Scrakes can deal hideous amounts of damage once enraged and should be killed as soon as possible before they can kill players with their area of effect attacks. It is impossible to stop a Scrake from raging once it starts, however EMP Grenades and Freeze Grenades are able to temporarily stop its rage.


- On Suicidal and Hell On Earth, Scrakes do not gain any additional abilities or attack animations; Instead they simply enrage quicker at higher health thresholds.

- Scrakes are extremely dangerous Zeds that should not be engaged alone unless you are properly equipped to exterminate it in a short time span, to ensure that it does minimal damage.
- Generally, do not shoot and enrage Scrakes when the team is ill-equipped or unaware of its presence. Doing so could cause the enraged Scrake to kill an unsuspecting player who is busy dealing with the lesser Zeds.
- Quick decapitation kills are the preferred method of extermination. This can either be done alone or with the help of your teammates. If your perk is one that is geared towards killing large enemies (Demolitionist, Gunslinger, Sharpshooter, or Berserker), you are often able to easily kill Scrakes on your own as it is your role in the team.

- Gunslingers can swiftly decapitate Scrakes with repeated headshots using Dual_.500_Magnums or Dual_.50_Desert_Eagles. This is especially true with a Gunslinger that has the Rack'em Up skill, which massively increases headshot damage.
- Desert Eagles and Magnums have stopping power; Around the 4th to 6th repeated headshot the Scrake will be flinched momentarily, and you should use this split second to pump as much lead into its head as possible. This is usually enough to kill it.
- Failure to decapitate the Scrake before it gets into striking range can be devastating in multiplayer games, as once they start to attack they swing with full body pivots, making their heads very difficult to hit. This usually results in the team having to kill a Scrake through body damage, thus wasting the headshot damage and ammunition.

- Sharpshooters are practically geared to take out Scrakes with no difficulty. In particular, the Rail_Gun with auto-lock turned off, and with all possible damage skills equipped, can take out a Scrake in a single headshot on Hell On Earth difficulty with 6 players.
- The Sharpshooter also has the option of using the M14_EBR and the Crossbow combo to kill Scrakes. Generally, it's using the M14_EBR with the Ballistic Shock skill to increase its stunning power. At around the 5th consecutive headshot, the M14 EBR will stun the Scrake, which leaves it standing still for about 1.5 seconds. At this point, either continue shooting its head to decapitate it, or pull out the Crossbow to deal the killing blow (which would be significantly buffed up by the headshot bonus of Rack'Em Up).

- While Scrakes take reduced damage from explosives, the Demolitionist is able to exterminate Scrakes in a single shot using the RPG-7. The Scrake has a unique weakness to the RPG-7's ballistic impact damage.
- Using this extreme vulnerability, a Demolitionist with all possible damage skills equipped can deal massive damage to, if not outright remove, the head of a Scrake in lower difficulty 6 player games. On Suicidal and Hell On Earth, some form of damage has to be applied to ensure the RPG-7 Impact finishes off the Scrake.
- If you must help the team to kill Scrakes, you must hit it directly with the RPG. The explosions do minimal damage to Scrakes.

- Berserkers have two ways to deal with Scrakes: At range, with the Eviscerator, or in melee combat, with the Pulverizer or Zweihander.
- If you choose the Eviscerator method, only a maximum of 2 headshots are needed to cut off the Scrake's head. The first shot to the head will enrage it, and the second will take its head off. The challenge here is landing the second hit while it is running at you and swaying its head.
- This second hit can be made easier by throwing an EMP to temporarily calm it down, making it walk again.
- If you choose the melee method, you will have to familiarize yourself with the Blocking and Parrying mechanics, as you'll need it to interrupt the Scrake's attacks and reduce the damage you take. Strike at its head in between its attacks or after a successful parry.
- Repeatedly landing strong attacks on the Scrake will eventually stumble it or even knock it down, allowing you to get multiple free hits on it while it is recovering.
- In a team environment, the ranged method is preferred over the melee method. Good usage of EMPs can allow a coordinated team to decapitate a Scrake without it ever enraging. With the massive damage of the Eviscerator, you are already able to deal half the damage needed to decapitate a Scrake; Your team just has to do the other half.
- You can also save teammates from raging Scrakes by throwing EMP to stop them from raging, which can allow you to catch up to the Scrake and make it change aggression towards you, allowing your teammates to regroup and heal up.