The Survivalist perk is the utility team member who can fill in for several roles on a team depending on the skill and weapon choices of the Survivalist. While a Survivalist is never going to be as effective at a perk's specialty as that perk, they can get close while at the same time also bringing several other perks' strengths to the table. Survivalists can use nearly any weapon effectively, allowing them combinations of armaments that no other perks can wield efficiently.

The Survivalists are the copycats / mimics of the team. They has no dedicated role and so specific perk setups but instead their skill choices offers them a bit of everything from the other perks. It's up to the player to chose their skills and role.

It should be noted that while trying to be good at everything the Survivalists will never actually be better in any given role than a dedicated perk.

Survivalists has no perk-specific weapons, instead they utilize weapons from the other perks. Their passive bonuses works with all weapons.

This table represents the passive stat bonuses the Survivalist receives.

This table represents the active abilities the Survivalist has access to. You have the option of choosing one per tier. 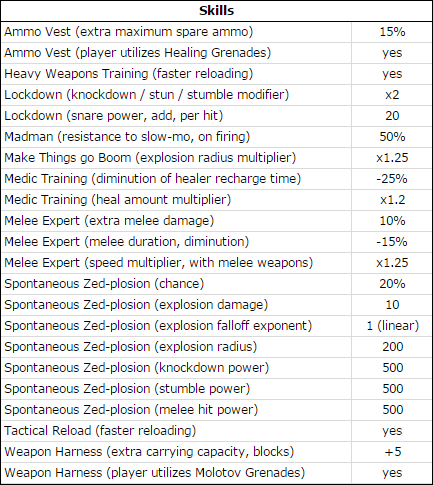 For Survivalist every weapon and damage type is on-perk in terms of passive bonuses.

Try to fit into the role your team needs most. If your squad having hard times killing big ZEDs, always low on health or constantly being overrun by groups of small ZEDs you might consider bying RPG-7, HMTech-401 Assault Rifle or Flamethrower and don't forget that the proper skill choice will enhance your weapon abilities.