The Support is the wall that keeps ZEDs from charging through choke points into the squishy center of your squad.

Armed with a variety of shotguns, the Support's penetration power allows them to deal with groups of ZEDs quickly. Supports can also weld doors with increased speed and has the unique ability to repair destroyed doors, allowing them to more easily block off additional approaches and create the choke points they thrive on.

Supports receive bonus XP for welding doors. Additional XP reward given for building up every 510 points for welding meter.

Each Support has its own "welding" meter. When welding the door (un-welding does not count) with each Welder's attack this meter increases by Welder's weld rate (from +68 points at level 0 up to +102 points at level 25). When meter filled, i.e. has 510 points on it, it resets and player recieve additional XP reward. The meter does not become zero but instead begin with a leftover from the previous welding cycle. For example the player who had 500 points on the welding meter and then added +102 more points by single Welder's attack will get XP and initiate a new cycle with 102-(510-500) = 92 points on the welding meter. Support can build up its welding meter from multiple doors, the meter assigned to perk not to the certain door.

This table represents the passive stat bonuses the Support receives.

This table represents the active abilities the Support has access to. You have the option of choosing one per tier. 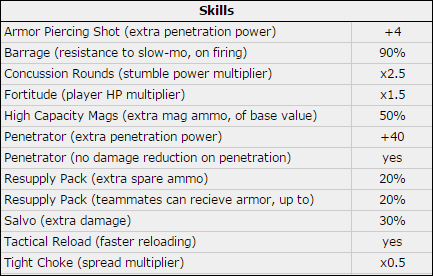 Following weapons and damage types are associated with the Support. They are getting damage bonuses and buffs to their attributes from the respective skills:

Great perk to control ZED crowd at the choke-points.

Quite effective against Gorefasts and Gorefiends thanks to their native weaknesses to shotgun damage.

Use the extra carrying capacity ability to arm yourself with the HMTech-301 Shotgun or lightweight HMTech-101 Pistol.

If you planning to take down Scrake solo, the Double-barrel Boomstick's headshot is a good starter. It has a lot of stumble power which would give you enough time to reload the weapon or to switch to more powerful shotgun.

Work together - combine the passive ability to restore the doors with Demolitionist's Door Traps ability to set up explosive traps. For better effect don't forget to keep the door "alive" until it would have enough ZEDs behind it.

Utilize Double-barrel Boomstick's special knockback feature to get off of the ZED's melee attacks and to mitigate the falling damage too.