Being a sniper by nature, the Sharpshooter mostly remains stationary while concentrating on long range engagements of lone big targets like Scrakes and Fleshpounds. As a support-type unit, they are somewhat vulnerable in close range combat and hence have to rely on their teammates quite often.

Their skill choices offer them a tradeoff between weapon power and mobility.

Sharpshooters receive bonus XP for scoring head shots. It is not necessary to kill ZEDs - XP is given for every shot in the head, lethal or not.

This table represents the passive stat bonuses the Sharpshooter receives.

This table represents the active abilities the Sharpshooter has access to. You have the option of choosing one per tier. 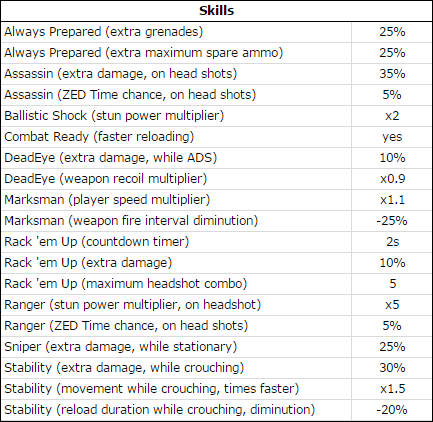 The following weapons and damage types are associated with the Sharpshooter. They get damage bonuses and buffs to their attributes from the respective skills:

You are not meant to fight all the ZEDs alone. As a "big ZED killer" you should stay at the middle of your team, preferably so you can have an overview on multiple paths and support your team by taking down lone tough targets like Sirens, Husks, Scrakes and Fleshpounds. It is strongly advised for you to not be a "lone wolf".

Aim for the head - that's what all snipers do! Having slow firing weapons with limited ammunition leaves you no room for mistakes. Good Sharpshooters always know where to aim and when to shoot. However, don't forget that with a proper skill setup, your Winchester 1894 will be a bit more forgiving as it would let you to one-shot-kill any basic ZED like Clots, Crawlers and Stalkers even on body shots.

Having a Crossbow in your arsenal is a wise choice if you plan to conserve the Freeze Grenades for the Fleshpounds. Even without Ballistic Shock, it still can stun a Scrake on headshot.

A Rail Gun setup only leaves you 5 spare blocks of weight. To improve your self-defense, try out the boomstick and a medic pistol. The boomstick will help you against a hordes of ZEDs, while the pistol can be used for taking off heads of the small ZEDs.

The Freeze Grenades are very helpful when you are fighting big ZEDs, as its explosion stops their movement and leaves them exposed to headshots. However, keep in mind that freezing an enraged Fleshpound is almost impossible.