The SWAT perk is the close range combatant who hoses down Zeds with submachinegun fire, hacking through them with a storm of lead and steel. Using a variety of submachine-guns, the SWAT perk has the highest rate of fire of any perk; while each individual bullet may not inflict much damage, they can rarely fire just one bullet. The SWAT perk belongs in the thick of combat and can mow down less powerful Zeds like a scythe through wheat.

SWAT is a well-rounded ZED killing machine specializing on sub-machine gun usage. A bullet hose nature of the SWAT weapons leaves ZEDs no chance to stand the ground long enough. On top of that SWAT's arsenal offering a FlashBang grenade, a one of the most effecient ways to stun ZEDs.

SWAT skill choices let them focus on either improving their crowd control abilites as well as their own "tankiness" by adding buffs to the armor, stumble power and the sidearms or on enhancing their weaponry by giving it more ammo, stopping power and better handing.

This table represents the passive stat bonuses the SWAT receives.

This table represents the active abilities the SWAT has access to. You have the option of choosing one per tier. 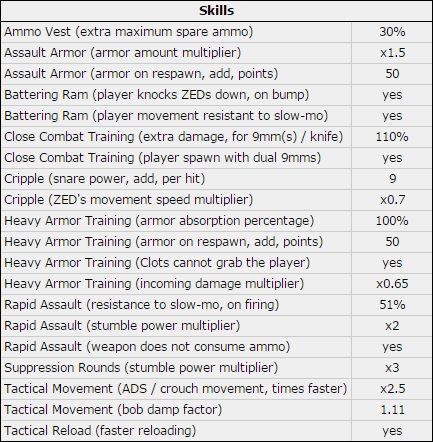 Following weapons and damage types are associated with the SWAT. They are getting damage bonuses and buffs to their attributes from the respective skills:

As your "AR-twisted brother", you are among the firsts who mets the ZED hordes. Use the advantage of the fast firing weapons but don't forget that each bullet has rather low damage, so aim for the head!

Conserve your ammo: your ammunition is quite expensive, at early ways use the advantage of Close Combat Training skill to one-shot-kill small ZEDs and save yourself some SMG ammo. Don't forget that your weapons has also a single/burst firing mode which will help you too.

While you might want to improve your teamplay by having healing-capable HMTech-201 SMG in the inventory, don't forget that this is the only SMG as actually cannot kill any basic ZED by the single headshot.

Combine the stun effect of the FlashBang grenade with the Kriss' high ROF for safe Scrake / Fleshpound takedowns.