The Firebug is the flame-spewing maniac that keeps the Zed horde from overrunning your squad. Armed with a variety of fire-producing weapons, the Firebug can put large groups of Zeds in a panic by keeping them burning until they are little more than cinders. While Firebugs often score fewer Zed kills than other perks, they instead usually lead in assists as they hose down large numbers of Zeds with their gouts of problem-solving fire.

Being a flame weapons specialist, the Firebug sets multiple ZEDs on fire at time, making them suffer from the damage over time, stumbling and forcing them to panic which effectively decreases overall threat of the enemy crowd. Flame weapons of the Firebug provide a wide variety of ways to apply the damage.

Firebug skill choices let them focus on either killing ZEDs faster via improved flame damage and afterburn or on controlling the ZEDs flow through the various incapacitations methods.

This table represents the passive stat bonuses the Firebug receives.

This table represents the active abilities the Firebug has access to. You have the option of choosing one per tier. 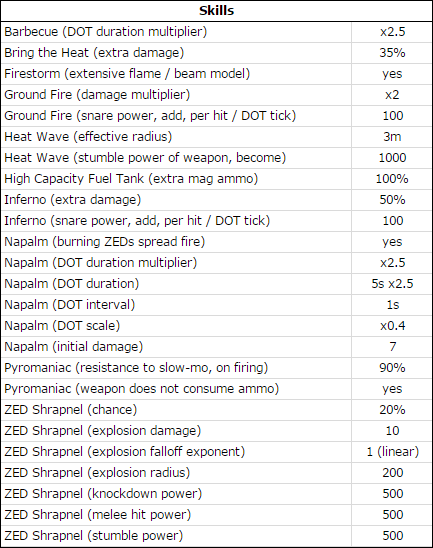 Following weapons and damage types are associated with the Firebug. They are getting damage bonuses and buffs to their attributes from the respective skills:

Due to the natural resistance to fire, Scrakes and Fleshpounds should be the lowest priority for Firebugs. Instead focus on killing small ZEDs and clearing escape routes as your team will likely fall back upon engaging the big ones.

Learn your weapons - despite the plain notion of how flame weapons should be utilized, they actually offering a wide choice of ways to deal the damage including afterburn, ground fire and splash damage.

If your teammate is in trouble save them a second of two by utilizing your special ability to stumble ZEDs via Heat Wave skill - it can even stumble an enraged Fleshpound!

Even if your weapons are not as much effective against Husks as many others, you still might want to focus on killing that ZED. Your fire resistance ability and Incendiary Trench Gun will aid you in this mission.

Your Molotovs not only set ZEDs on fire but also spawn a light emitting flare that lasts for roughly 30 seconds. Very helpful if you play on dark maps like Catacombs.

The Firebug does well to understand how important their role really is. Although being the most efficient and effective killer of "trash" ZEDs in the game isn't the most glorious of roles, it is arguably the most important. As such, Firebugs that forgo the short-term glory of attacking Scrakes, will dramatically increase their team's chances of survival by dealing with the more numerous and dangerous-in-numbers weaker enemies. Firebugs that possess a degree of lateral thinking and forethought will consistently be able to keep trash ZEDs away from the team's position, simply by circumventing Scrakes and Fleshpounds, and concentrating on the other, weaker, enemies.

By contrast, if the team has decided that they will kill Scrakes and Fleshpounds by decapitation, then Firebugs do well to observe this team idea by avoiding big ZEDs entirely. Because flame weapons cause body HP damage almost exclusively, most attacks upon Scrakes / Fleshpounds with flame weapons will not assist in achieving a decapitation due to the difference in head and body HP pools. In actuality, using flame weapons to attack big ZEDs that result in "Fire Panic" and "Stumble" afflcitions, will negatively impact a team's ability to smoothly decapite them. As such, it is important for the team to discuss their intentions and make their roles clear so that the chances of survival for all players on the team is maximised.