Dosh is the new currency in Killing Floor 2, replacing the pound sterling from the first game. Dosh is used to buy equipment at the Trader.
Players can share money between each other by throwing it in stacks of 50 Dosh. Thrown money disappears after 2 minutes if not picked up.

Each player receives money at the start of a game based on difficulty.

There is a penalty for dying, based on difficulty.

However, if a player has less money after the death penalty than a newly joined player would have, the player will instead receive that same amount of money.

Money is earned through killing specimens. Each specimen has a Dosh value which is modified and distributed to all damaging players once the specimen is dead.
The final value earned for each player is based on difficulty, the number of players in the game, and the amount of damage done to the specimen (in %).

Experience is gained by killing specimens. Each specimen is worth a certain amount of experience points, depending on difficulty. Whenever a specimen dies, any player who damaged it receives its full experience value.

Each perk has its own experience and level which starts at 0 and caps at 25. Experience for a perk is primarily earned by using its class weapons. Using off perk weapons does not result in any experience gain except for the 9mm Pistol, which gives experience to the selected perk. Damaging a specimen with multiple class weapons splits the experience points between the perks. Each perk also receives bonus experience for performing various actions, see each perk page for specific details.

Once all specimens in a wave have been killed, the trader opens up for a limited time before the next wave begins. The opening time is 90 seconds on Normal and 60 seconds on Hard, Suicidal and Hell on Earth.
The trader and the trader rooms from Killing Floor have been replaced by trader pods. Players can buy, refill and sell equipment while standing close to a trader pod. 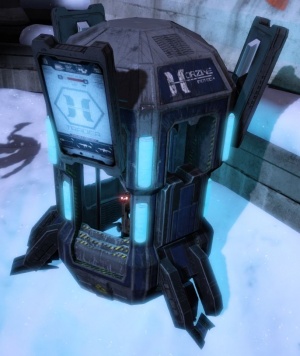 The number of waves for a short, normal and long game is retained from Killing Floor. In addition to the standard waves, there is also a final wave where the boss appears.

Each wave has a set number of specimens that will spawn, differing depending on game length. The number is affected by difficulty and the number of players in the game.