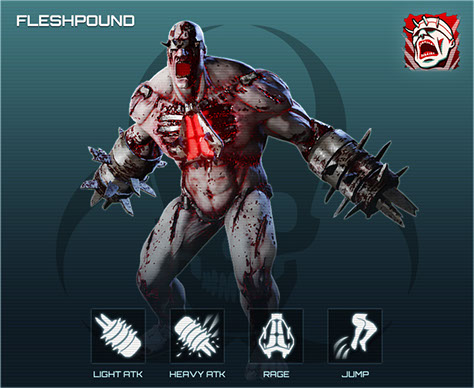 The player-controlled Fleshpound is one of the playable ZEDs in Killing Floor 2's Versus Mode. It is a melee-only ZED that, along with the Scrake, might be considered as a highest threat due to its rage ability, high amount of the health, damage and unparryable AOE attacks.

The player-controlled Fleshpound is not restricted to walking while docile and can enrage at will, as well as perform every attack that AI Fleshpounds are capable of, as well as some additional attacks which AI Fleshpounds do not possess.The Fleshpound's role in the ZED team is to lead the charge as the tank, soaking up damage. This will force the Survivor team to focus fire on you, allowing your teammates to attack or surround them while they are trying to take you down. Alternatively, player Fleshpounds can wait for their lesser brethren to occupy the Survivor team before charging in and dealing as much damage as possible. While the Fleshpound does not do as much damage as the Scrake, he has higher health and different resistances, allowing him to take a higher amount of punishment before going down.

Due to Game Conductor mechanics, player-controlled Fleshpounds have their health modified based on the average level of the Survivor team. Values vary within (x0.85 - x2) range.

Fleshpounds are weak to microwave and are resistant to other non-ballistic damage types.

Fleshpounds resist to every type of ballistic weaponry, mostly to assault rifles and sub-machine guns.

Fleshpounds have two weak spots, which is the head and chest plate. Their arm grinders mitigate half of the incoming damage.

As a Fleshpound in PvP, it is not a good idea to attack recklessly as soon as you take control of the Fleshpound, be patient, wait then attack when they don't expect it, or attack in with other group of player-controlled ZEDs especially Sirens and Scrakes, if you have communication with your teammates you can tell the player who's controlling the Siren to trap a human with their Vortex attack for you or the player who's controlling the Scrake to attack them from behind and you're from the front, or just rushing the humans down when they're busy fighting the other lesser ZEDs.