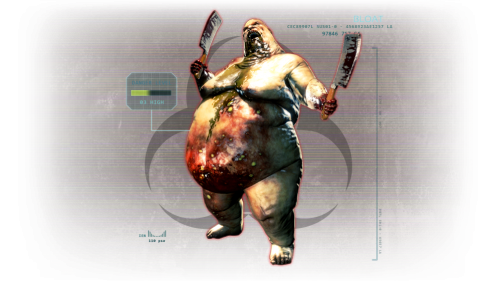 The Bloat is a large but slow zed that attempts to approach players and spit bile on them. His health is very large considering his appearance in wave one and body shots are not recommended. If allowed to close distance, the bile will begin to eat away at armor and health and will apply an effect on the players screen making it difficult to see. Being taller than many other zeds, he can often times be headshot over a mob of others and it is recommended to not approach this zed unless you must. He is considered to be of high threat to players due to his damage over time bile and vision disruption, however he is often too slow to make much use of it if dealt with soon enough. Engage when convenient.

Do not attempt to body shot this foe as he becomes something of a bullet sponge. Simply pick off the head at range and watch him waddle to his death.