Difference between revisions of "Scrake (Killing Floor 2 VS)" 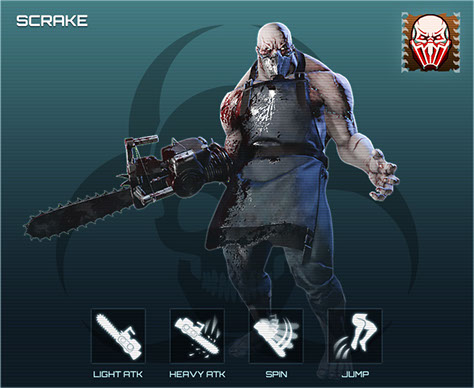 The player-controlled Scrake is one of the playable ZEDs in Killing Floor 2's Versus Mode. It is a melee-only ZED that, along with the Fleshpound, might be considered as a highest threat due to its high amount of the health, speed, damage and ability to perform unparryable AOE attacks with its chainsaw.

Due to Game Conductor mechanics, player-controlled Scrakes have their health modified based on the average level of the Survivor team. Values vary within (x0.85 - x2) range.

Player-controlled Scrakes have a wide variety of damage type resistances and one notable weakness.

Scrakes are neutral to microwave and are resistant to other non-ballistic damage types.

Scrakes resist to every type of ballistic weaponry except rifles and are significantly resistant against sub-machine guns.

Scrakes have only one unique weakness that they share with their AI counterpart which is an impact damage of the RPG-7 projectile.

Scrakes have only one weak spot, which is the head. Their chainsaw mitigates half of the incoming damage.

All melee attacks except for "Gutbuster" attack do full damage to players - x1 and vary by possible amount of the hits.
"Gutbuster attack" - x0.5.